From Shipyard to Heat Pumps: One Woman’s Path to Success in the Clean Energy Field 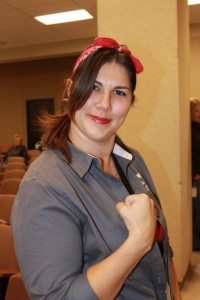 Bowles as “Rosie the Riveter,” an icon for many women in the trades. Rosie the Riveter was popularized during WWII when women filled trade roles left by men called to the front lines.

It was 2007, and Sara Bowles found herself out of a job. She’d survived the first round of layoffs at Westport Shipyard in Hoquiam, but the second one swiped a position as metal polisher right out from under her.

“I loved that job,” she says, recalling with fondness how she often came home covered in metal dust. “It was a killer job for the area, too. Close to town, good benefits, weekends off.”

The problem was, the maritime pleasure craft industry wasn’t exactly recession proof. She did finish work on metal handrails and other parts that went into multimillion dollar yachts, and when the economy tanked, there wasn’t as much call for those.

She’d been good at it, too. Like a lot of women, Bowles had an eye for detail that made her well-suited to finish work, and she’d always been good with her hands, typically drawn to hobbies like furniture staining, or rewiring lamps. Growing up in the woods outside Monroe, Wash., she never shied away from any work due to her gender. “I always had the mindset that I could do anything you can do and probably better,” Bowles says. 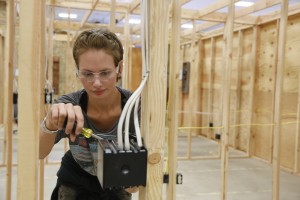 A student at the Bates Technical College Electrical Construction Program.

So when the layoffs hit the shipyards, Bowles knew her next career move had to be recession-proof. As a single mother, she had to position herself to stay employed no matter what happened to the economy. Her daughter depended on her.

“I figured there would always be work in the energy industry because of our society’s growing reliance on power,” explains Bowles. And fortunately for her, Grays Harbor College and Centralia College had a partnership that allowed her to earn an Applied Associates in Science Degree in Energy Technology. She was able to take classes taught by Centralia professors like Rulon Crawford and John Steidel remotely, learning about power plant operations.

The curriculum covered power generation from all sources, transmission and distribution, basic electricity, and most importantly for Sara, energy efficiency.

“Energy efficiency spoke to me,” Bowles says. “I like the idea of leaving the Earth clean for the next generation.”

By 2010, she’d earned her AAS. But highly driven, she looked for ways she could get even more out of her education.

Evergreen State College’s Upside Down Degree program fit the bill. It allowed Bowles to take the broad-based general courses she hadn’t previously taken while honoring the energy-specific education she had, all within her already defined career focus. Evergreen had an articulation agreement with Grays Harbor College that made this possible. “They accepted all my credits and had the curriculum that allowed me to build further on my energy tech degree,” says Bowles. 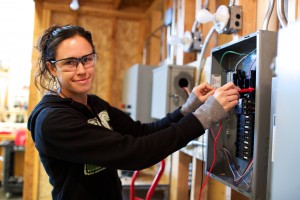 A student at the Bellingham Technical College Electrician Program.

She earned a Gates Foundation scholarship for the first year, with student loans filling in the second. Her schooling included a paid internship with the Lewis Economic Development Council, which gave her the opportunity to run the Lewis County Energy Program focused on a commercial lighting program funded by the WSU energy grant. When that grant ended, she worked for a while at The Center of Excellence for Clean Energy. And then she landed her dream job. 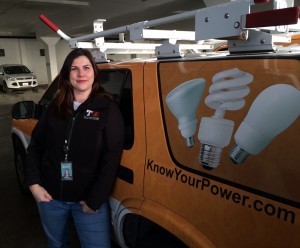 Sara Bowles on the job at Tacoma Power.

Bowles is now Tacoma Power’s Residential Conservation Program Coordinator. “It’s a mouthful of a title,” she says. She works primarily with the ductless heat pump and duct sealing program. The heat pumps use what she rattles off as a “super simple inverter-driven technology with a variable speed fan indoors and no ductwork for heat to escape.”

As part of her work in the field, she conducts inspections, routinely climbing into crawl spaces under her customers’ houses. Even if a male customer doesn’t initially warm to the idea of a woman inspector, by the time Bowles suits up and ventures into that territory, she’s earned his respect. “Wow, I don’t even want to go down there, some of them will say.”

It’s been a long and winding road since Bowles lost that shipyard job, but she loves her work now even more. “If I can spend 30 years at Tacoma Power,” she says, “I will.”

Lisa Brunette is a corporate and institutional storyteller tasked with helping the Center of Excellence in Clean Energy tell its story.